I had the magnificent opportunity to engage with Filipino village women on some topics dear to my heart a few months ago. An opportunity I almost missed because I am fond of leisure and comfort. But in a rare-to-me display, God pressed it on my heart to accompany my husband. Here’s the story, written for a quarterly publication for our denomination.

The unwelcome thought was hovering at the edges of my mind at the IF:Gathering (a women’s conference) in February 2017. We women were being urged to consider expanding our vision of who God wanted us to minister to. I thought of the Bible study I lead, the woman I am discipling, and also, reluctantly, of the Philippines, a country I had never been to. The idea stayed in my mind and when we wrote names on small tiles at the end of the conference as a reminder to take home, I found myself writing: Philippines.

My husband had already taught several times at the Bicol Center for Christian Leadership (BCCL) in Legazpi, a city in southern Luzon Island. The center was begun by NAB missionaries, and has been headed up by national leader Mayette Ativo-Bueno since 2004. Steve’s next trip was scheduled in September 2017, and I couldn’t escape the sense that I needed to accompany him this time.

I didn’t mention this to him right away, but he saw the tile on my desk. “The Philippines?”  “Oh yes, that. I think I need to go with you,” I admitted. My husband was thrilled at having me come along, but since we had lived in SE Asia previously, I knew well the demands of the tropical climate and the long travel hours. I admitted it was not really my idea, but it did seem to be God’s. Elisabeth Elliot has said that obedience to God is the greatest consolation, and this I am in tune with. I have learned there is no shame in not wanting to do difficult things, but when God makes his will clear we have to trust he will enable and sustain us too. So plans were made.

If I went to the Philippines, I wanted to be helpful, not just an extra passenger. I began corresponding with Mayette about where I might be able to contribute as I am an RN and a private practice lactation consultant (IBCLC) in California. She had the idea to do health conferences around the area and began setting them up with her contacts. I would teach about infant feeding and hygiene to village women and health care workers. Mayette could see that these conferences as a service to the communities would strengthen bonds between BCCL and local churches where graduates were ministering.

My first conference was at a church building in Tabaco City, a small suburb of Legazpi that lies at the foot of the Mayon Volcano. It has been active for the last 400 years, but during our visit it was only smoking! The trip of about 20 miles took an hour and a half as roads are bad and full of bicycles, motorcycles and pedestrians. We arrived to people crowding into the open meeting area of the unfinished building. Mayette had brought a portable fan that worked on batteries, but it was already meltingly hot. 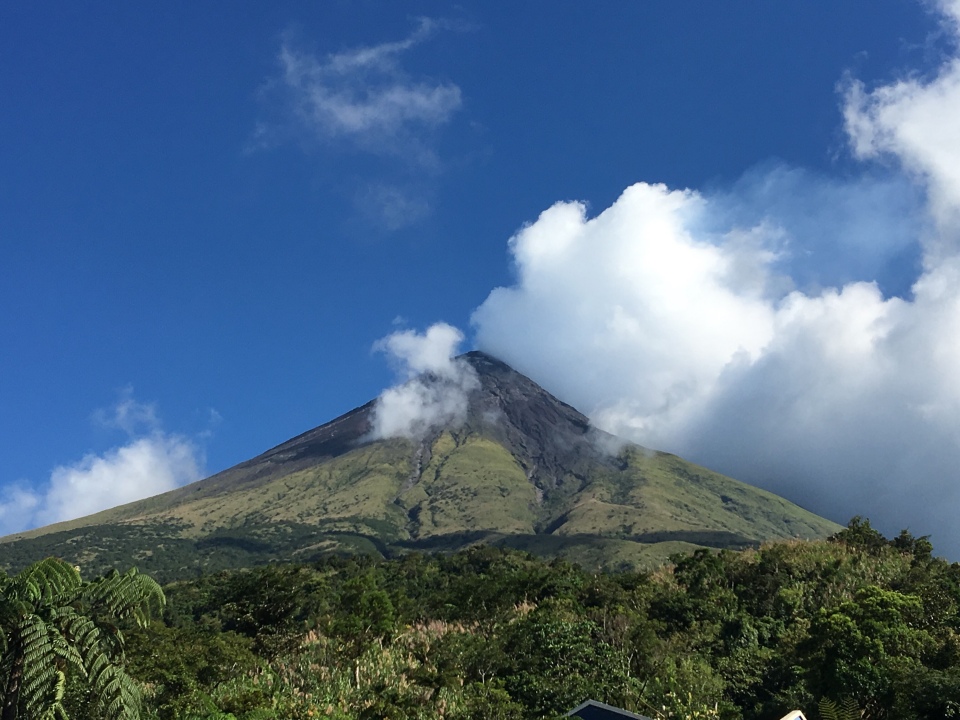 I had prepared three talks, and the original plan was to give them over the course of the day (or so I thought). Now Mayette said instead we would do the three one hour talks back to back with a few minutes break in between for questions. That way we wouldn’t have to be in the heat so long, and we were more likely to keep our audience which was by now about 200. There were mostly women, but several men, a good many children, and a couple of dogs who made themselves comfortable at my feet.  Clearly this was the most interesting thing happening in this village, so anyone passing by wandered in. 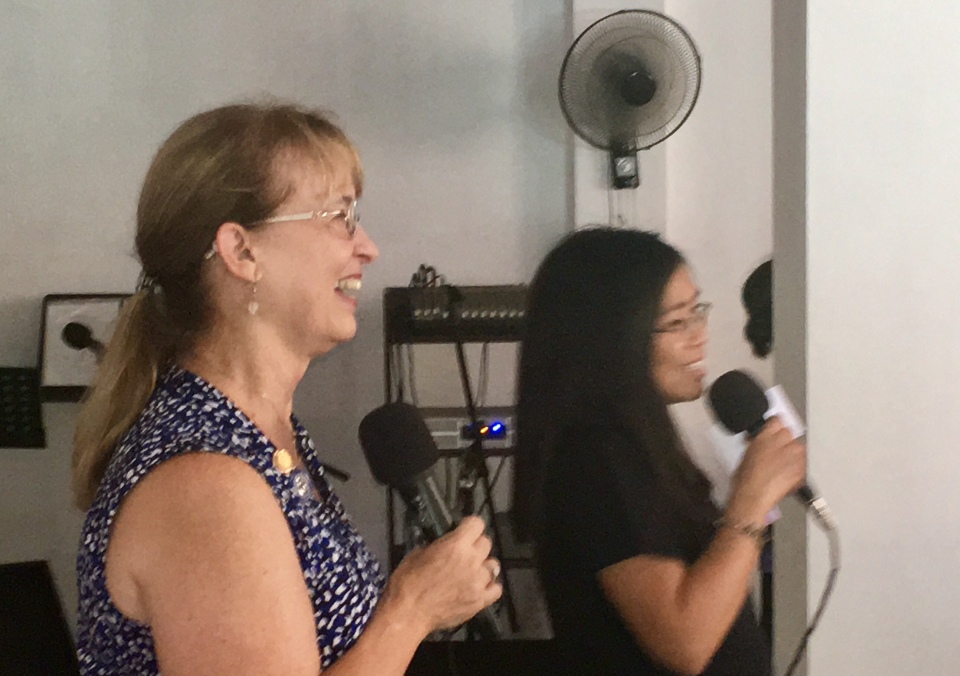 Happily, there was also a small group of health care workers on the front row, taking notes and encouraging me with smiles and nods.

The women were attentive and laughed at my jokes, so I felt that they were tracking with me, always a concern when you are communicating cross-culturally. Mayette helped with translation. I taught on the importance of exclusive breastfeeding (no other added foods or liquids) for babies up to six months, especially when clean, quality food is difficult to obtain. I also went through some how-to’s and best practices. I had researched breastfeeding attitudes and customs in the Philippines, so tried to mention things I knew they would relate to.

The questions they asked were interesting, and I was so happy they felt free to talk about what was on their minds. Some of the questions were:

“If a mother needs to breastfeed the baby at least a year, won’t the milk turn sour by then?” (this one from a young father who had wandered in)

“If a mother breastfeeds the baby on the same day that she is doing the washing (by hand), won’t the baby get a cold?”

“If a mother is sick, should she still breastfeed the baby?” (This is a common question I get in the US too.)

At the end of our few hours together, I asked the women what they learned. Here are the encouraging responses:

~Breastmilk keeps the baby from getting sick.

~Breastfeeding protects the mother from cancer.

~If I breastfeed, I will have more money to buy food for the rest of the family.

My second conference a few days later was in Sorsogon City, where BCCL has a satellite location. My husband taught there as well as in Legazpi. It was attended by about 100 women plus the requisite children, dogs, and stray men. I was using a PowerPoint with many pictures of Filipino women breastfeeding to be sure women felt connected to what I said. When I saw all the men present, we asked the women if they felt comfortable. After all, I was going to be showing pictures of a few nearly bare breasted women and in addition we’d be talking about women’s menstrual cycles. The women laughed and said it was fine, they were all married women!

My talks in both cities on hygiene went particularly well as I had found articles and cartoon pictures of typical Filipina myths about women’s health and reproduction. The women even filled me on a few more common beliefs! This topic also gave me the opportunity to remind the women of how wondrously they have been made by God (reading Psalm 139) and how proud they should be of their bodies’ amazing capabilities. Culturally, women in the Philippines are still ashamed of their bodily functions and occupy a more traditional position relative to men as being much less important. I believe the women enjoyed the chance to talk freely about these matters with a health care professional and have many of their concerns put to rest.

In Sorsogon City most of the women were part of Compassion International, receiving benefits through sponsorship. I had brought dozens of small decorated Bible verse cards to be colored, along with colored pencils. Before and after the talks the women greatly enjoyed spending a few minutes coloring and having one each to take home.

My third and last conference was for health care workers, and I hoped for this one to bring lasting change since it is always most effective to teach the teachers. However the night before, the conference was cancelled due to an emergency meeting that was called by the government. We were all disappointed at this. I met with the teary woman who had organized the meeting and left her all my written materials and PowerPoints so that she could use them as the opportunity arose. Flexibility is certainly one of the first requirements for successful missionary work.

This picture is taken from our apartment above one of the main streets of Legazpi of smoking Mayon Volcano and scary electric wires.

Because of my trip I developed a true love for the Filipino people, who were endlessly kind, welcoming, and hungry for spiritual food.  I believe the women were truly encouraged in feeding their babies the best way possible and taking care of their own amazing bodies.

Obedience to the Lord does not always bring pleasure and comfort, but instead something much better: the knowledge of a job well done just for His own dear sake.